1st Detect produces the most capable field deployed Explosive Trace Detector (ETD) and Narcotic Trace Detector (NTD) available for airport and port-of-entry use today. The TRACER 1000™ is a breakthrough technology that has taken the most sensitive chemical detector technology, mass spectrometry, from the laboratory to the field.

The 1st Detect Technology traces its beginnings back to the United States Space Shuttle program and NASA’s requirement for an air quality monitor on the ISS with laboratory mass spectrometer capabilities. In 2006 SPACEHAB (predecessor) entered into a NASA Space Act Agreement and after an exhaustive search, it was determined that the Cylinder Ion Trap (CIT) design would best meet NASA’s needs. On December 18th, 2012, the MMS-1000 mini mass CIT spectrometer was delivered to NASA.

It was immediately recognized that the 1st Detect Technology was a breakthrough that could be applied to many valuable applications in many industries. The U.S. Homeland Department of Homeland Security (DHS) had been looking for a replacement for the currently used explosive detection technology that was reaching its technological limits. And, in 2008 1st Detect, Inc. was created to pursue commercial opportunities including Airport and point-of-entry security applications.

After many years of very hard work, on February 21st, 2019 1st Detect Corporation received the formal European Civil Aviation Conference (ECAC) certification to sell the TRACER 1000™ ETD to Europe for both passenger and cargo screening. The ECAC certification is also recognized throughout Asia and the Middle East and the Company is currently pursuing many international opportunities. 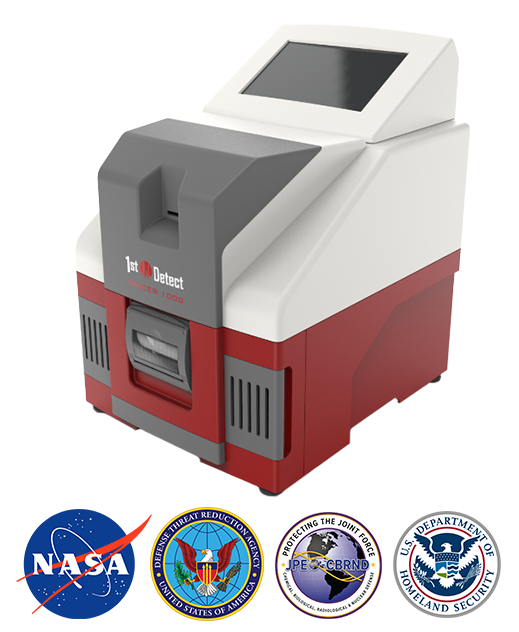